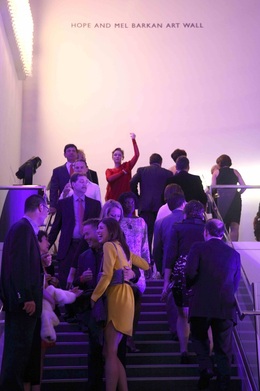 Photograph: Bob Raymond
The man and a story
I had been thinking of the piece in four parts- four, 6 hour performances back to back. The first 6 hours was a party, lots of people and lots of people talking to me –
A man, older, rich and with friends, stopped beside me as I was standing in the middle of the front stairs. He started talking his companions in front of me and purposely so I would overhear. He told me a long rambling and entertaining story the punch line of which was that he wanted to kiss me. I burst into a smile, he was delighted and charmed. I moved on up the stairs. I was concerned at my energy, how big and deep it needed to be to hold the full duration of the performance.  I wasn’t contained enough I thought. I was leaking all over the place, I felt like part of the entertainment, though this was a nice encounter.
- 10 am 19 September 2011, Hyatt Hotel, Boston.

The Pope and the MFA’s Collection
Amanda: When I’m moving terribly slowly I’m thinking of the body as a form in space, very sculptural and make references to paintings and sculptures. At the very begining I was going ‘I’m the Pope, I’m the Pope,’ [waving the hands around in the air] and I’m referring to lots of big fat red men in paintings.
Marilyn: and there, up there in the Gallery (laughing)
Liz: With the institution I would say that the reason why your proposal worked for the context is because it did seem celebatory, it did seem about the human spirit.