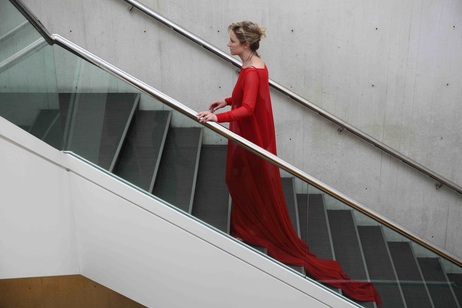 I notice Mari Novotny-Jones in the audience, on the back stairs, there is a crowd now. Mari told me she arrived at 2. She’s whispering to people, they are discussing the state I’m in. I decide I might be able to properly do the eye gaze. I pick a young man near Mari, its electrifying. I look at him. He’s scared. I slowly blink, meaning ‘I’m nice don’t worry’.  He’s so beautiful. I’m breathing him in, out, in. We stay like that for a while. It refreshes me. It’s better than honey or water.

I’m on the north stairs, two young girls are buzzing near me, one says ‘I wanna do it’, she moves and stands directly in front of me. I look her in the eyes. She physically shakes. I blink slowly to reassure her. I breathe her in, she has the most beautiful creamy chocolate skin, her hair is a funny shape. When we’re done she bounces back to the other side of the stairs to her friend shouting, ‘that was amazing!’

Marilyn: Those of us who had seen it earlier or really knew it was 24 hours, (there were alot of people who were in total denial you had been there that long) were really conscious of those really subtle signals you had.
Creighton: It was so haunting, the whole image, I feel that people who saw that are going to remember and feel that you’re not there. That’s it for me. Just very ghostly, not ghostly like an apparition, ‘cos you’re very dramatic, I mean the costume is very, very stunning, but not ghostly in the sense that you’re a real live performance artist and that you’re there and it’s very vivid, even the colour, it’s not like you can’t see it, its very bold, the idea of this woman walking the halls of the Museum at night is very haunting. 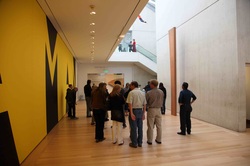 Photo: Bob Raymond
James: I spoke to this woman who was kinda confused about what was happening. She was like, 'is this woman art, what’s she doing?' She asked me, ‘what does she represent, what does she mean?’ I said, ‘I dunno she’s a performance artist her name is Amanda’ and she was like, ‘I don’t get that, but these on the other hand,’ and she was pointing to the flying sculptures on the ceiling in that big space, ‘these are like phenomenal, I understand these, I get art, I don’t get that’.


I’m moving very slowly now. Two girls are standing up the top of the stairs leaning on the banisters. They look at me very closely and have a discussion about my wedding ring, whether it’s an engagement ring or a wedding ring, if I’m married or not and then they remember themselves, they remember that I can hear them, that I’m there in front of them, that I’m human. They tell me the ring is very beautiful and hurriedly move away.