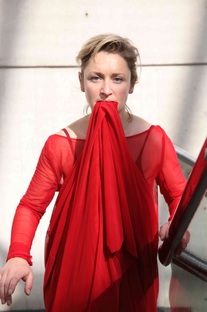 Photo: Bob Raymond
Amanda: With durational performances, actually, the work happens on site. You put a few of the bricks in place beforehand but actually it’s the time, and the energy and the audience that construct it.

Marilyn: The more you do duration work, the more you realize that while you might have a whole set of ideas, alot of it just falls away because you can’t sustain them beyond an hour or an hour and a half or whatever, and so the more you do this work the more you realise what you can sustain. You also begin to trust that something that seems too simple actually has the most power. (In) my experience of doing performance, where I’m paranoid that it’s too stupid and simple, those are probably the best pieces - trusting that it’s rich enough as an image that people can enter it and find meaning. It has to be that way in duration because you can’t sustain...giving giving giving, you have to let the work enter a more meditative space, a more open space. You just start doing it and there’s a point when you can’t think anymore, and that’s when it gets interesting... 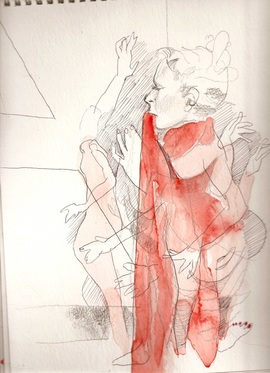 James Lyman drawing 4
Creighton: I also loved watching parents with small, younger children, 10 or under, there were alot of moments where children would stop to have a moment with you and parents would be like, ‘We gotta go, we have this, this and this to do.’ There was one younger girl who was maybe two or three and she was at the top of the staircase looking up at you, you were walking up, and her Dad was like, ‘Look at her look, her dress is so beautiful.’ and the girl just kept looking at your eyes she wasn’t interested in anything else and you gave just kind of gave her this wink and I just saw her face, it was this total awesome moment.

People kept asking me if it was your piece, particularly this woman was asking me, ‘So she made this?’ and I was like ‘Yes, she’s performing it and she constructed it and choreographed it,’ what ever words I used and she was like, ‘Someone else didn’t make this, she’s not performing for someone else?’ and I said ‘no.’  She couldn’t wrap her head around you, not like a situation with a choreographer and a dancer but this oscillation between all these different roles, and then she just dismissed it and walked away.
Powered by