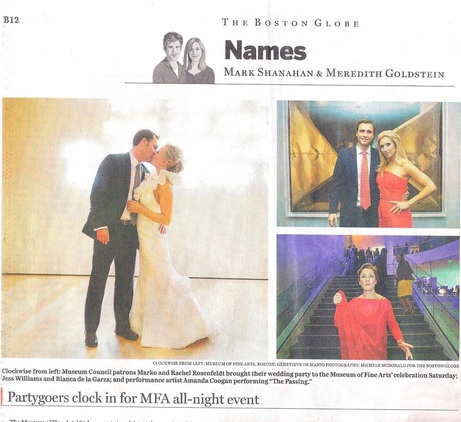 A newly married couple came in to the Museum and had some photographs taken.

Hayley: They had gotten married I suppose hours earlier and the reception was going to the Museum party. Basically, the Museum became a backdrop for their wedding reception photos.  They walked up and down the stairs to take pictures, which is when they posed with you (you were laying down on the landing step at this point in time).

I kind of felt like everybody who interacted with you while I was there was really rude to you or to me and Cait or just didn’t notice you. Somebody almost fell on you. I don’t know if you saw her, and some lady almost stepped on you too. I know your energy had been very, very quiet, but everyone who walked by between 3 and 7 were not very friendly and making little snippy side comments. After a while Kate and I were both lying on the ground and people were really upset about that ‘everyone’s just sleeping in the Museum, what is this, is this the performance, what’s all the fuss about’. Oh my goodness it just felt like everyone was pretty mean for the most part, except the guards and the people who were cleaning they were all really nice.