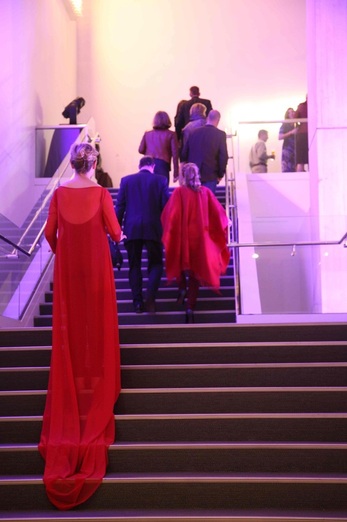 Photograph: Bob Raymond
‘I looked at her skin and I swore it was plastic’

James: There was that woman who was like ‘oh my god’ she wanted some gratification from you, she somehow wanted some (verbal) response from you and you weren’t going to give it, she came back again.
Liz: There were a couple of people who thought you were a sculpture at points, which is interesting that you say you come from that tradition. I think of your piece where you sign your back, I really like that piece, the composition and the human form. People were shocked when you moved and I heard people say ‘I looked at her skin and I swore it was plastic.
Amanda: As a woman artist, consciously the maker/performer allowing yourself to be observed, is a very complex political axis.
Liz: Yes, Richardo, my partner, thought it was a very feminist work because it was for that reason, you putting yourself on display but in a very assertive very, very driven, determined way and this incredible feat you did as a person and also as a beautiful woman.
Amanda: I don't know about that beautiful thing,
Tyler: Speaking about beauty, that was very interesting to see from the night to the end because at the night time period you had all your makeup on and your hair was still all done and you were fitting in,
Amanda: performing beauty,
Marilyn: fitting in with the party.