Tyler: when you looked me in the eyes,
my friend was there who you also looked at
and we talked about it
and one of the things we said is that it
was a very piercing, knowing, confident glare, or look,
and it was very, it really felt like you were looking into us, not at us.

24 hours is so long you have to dig deep, then dig deeper and when you feel you just can’t go on, dig deeper again – Now I was in a crisis. I felt I couldn’t go on. Quite a crowd was gathering around me. I had convinced myself they were gathering around cos I was nearly done. I started fixating on the clock, on everyday time. 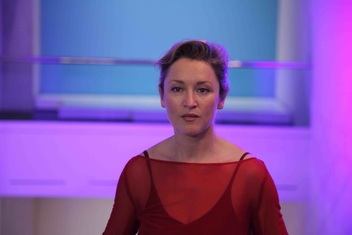 Tyler: By the end of it the make up had all worn off and, to me, you looked more human at that point. I wasn’t looking at a creation, I was looking at a person who was really doing these things. It was really interesting to see that happen.
Amanda: so all the facades had fallen away?
Tyler: Yes
Amanda: and the performance identity had fallen away?
Tyler: Yes, because at the begining I didn’t see you making eye contact with people and then by later the next day you were making this eye contact with people and really connecting with them on this level of human to human as opposed to watcher and art.

.A boy, about 6 years old and his younger sister came up beside me, he had a toy buggle and stood beside me and tooted ‘when the saints come marching’, they were giggling,. I simply stopped, held the image. They felt like little flies batting around me and at the same time, somewhere else in my brain, I thought they were hilarious. 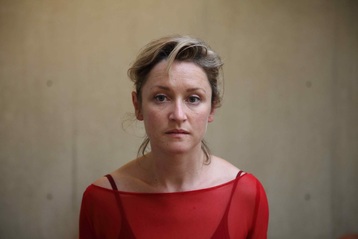 Creighton:
I feel like, for me, it didn’t fall away, it was like an unveiling of an unveiling of an unveiling, over and over and over again. People kept hystericizing your body in this way of, ‘its too much, I can’t,’ and I just thought about photographs of women performing Hysteria, actually performing it for clinical medical photographs and performance as resistance.
Amanda: Grande Hysteria
Creighton: Right, and this performance as resistance. There was something about things falling apart but it was always falling apart, it never landed somewhere because even if it would land you’d put the dress up over your face or there was always another moment and another turn, that was really interesting.
Marilyn: Always in control, that was part of the power - and you were powerful.
Amanda: I didn’t feel in control, I felt I had to keep digging deeper.