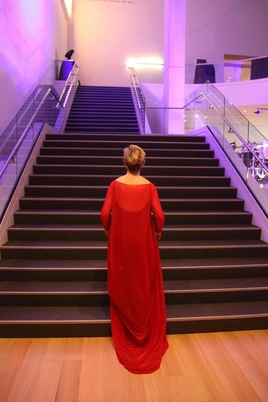 Tyler: People (were) just walking by looking and laughing with one another about you and what you were doing. I thought that was really interesting seeing that compared to the following day where people did stand and watch and pay attention.
Amanda: It was fun, and very playful, people’s interactions were very playful at the beginning
Creighton: There were these moment of anxiety I saw, you would make eye contact with people and there would be this anxiety of just having it be that (simply eye contact), and so they would try and converse with you to try and compensate for this anxiety they were feeling.
Liz: I think the party environment is very different to the everyday museum environment, for us it’s not the type of people who are usually circulating in our spaces and so its different. When you have Rafanelli, which is the people who did Chelsea Clinton’s wedding as the people who planned that party. They are huge party planners and they are thinking about the entertainment factor. So for me I was always like, “Okay, so this is Art. Its different from entertainment, and they actually got it, they were good about it but, the audience didn’t necessarily get that I think.
Amanda: and thats okay. It was so wonderful because it was 24 hours... once I interact in the verbal sense with somebody it’s a very direct one-to-one connection and that cuts out the 360 degrees. This is the way I practice, and so I was always terribly conscious about that, but didn’t want to be rude either because it was a party and people were being genuinely lovely and felt they needed to tell me that they wanted to kiss me or that I was magnificent, really lovely, but very different (to a normal performance audience). And, I suppose, at the beginning of such a long durational performance your energy is different.
Powered by